Greggs the baker's portrayal of Jesus as a sausage roll echoes the Gospel of John – biblical studies expert.

With more than 1,000 outlets across the length and breadth of the United Kingdom, Greggs the baker is a national institution. It’s not uncommon for queues to form in some towns and cities as the daily doughnuts, cheese and onion pasties and steak bakes come out of the ovens. But it is the sausage roll that is the star turn.


Now though, it seems it is the star that Greggs took too far. For Britain’s biggest bakery has had to apologise after it replaced the traditional baby Jesus in the manger with its famed product in a nativity scene. The image was used to promote its advent calendar and, the company says, wasn’t meant to cause offence.

Well, regardless of intentions, the image, with three wise men reverently surrounding a golden sausage roll in a manger, caused quite an uproar.

Many Christian Twitter users were at the forefront of this backlash against the image, tapping into the false narrative of the persecution of Christians in Western countries including the UK and US, and the idea that there is a “war on Christmas”.

While many of the “war on Christmas” debates focus on the secularisation of the winter holiday, in this instance the attention was on a private company supposedly making light of the baby Jesus for profit.

One organisation, the right-wing pressure group the Freedom Association, led by Simon Richards, called for a boycott of Greggs as a result of the image.

The viral growth of the hashtag #boycottGreggs has prompted the bakery to issue a formal apology. “We’re really sorry to have caused any offence, this was never our intention,” said a spokesperson.


My flesh is meat indeed

However, what might not be apparent at first glance is just how appropriate this debate about Jesus-as-sausage-roll is in light of the Gospels – and the Gospel of John in particular. Although the Gospel of John doesn’t describe the nativity scene that we find in Luke and Matthew, it is a Gospel intent on describing Jesus as a food.

In one well-known scene, after he has fed the 5,000 on the shores of the Sea of Galilee, Jesus launches into a speech known as the “Bread of Life Discourse”. John’s Gospel uses several metaphors to describe Jesus here, including both bread and meat – and scholars have argued that Jesus means what he says. 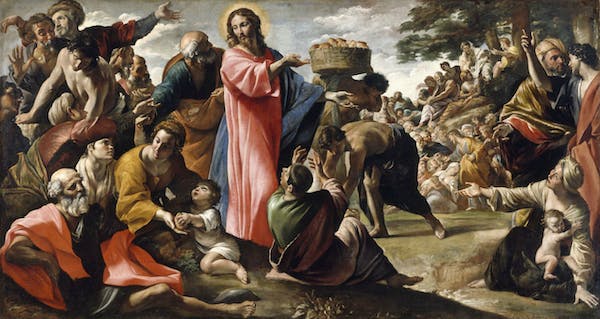 First Jesus declares: “I am the living bread.” Those listening to him are understandably confused, since they don’t see a loaf of bread in front of them but “Jesus, the son of Joseph, whose father and mother we know.” When Jesus hears them doubting his claims, he repeats his claim three times, finally stating explicitly that “the bread … is my flesh”.

After this conversation, Jesus makes a second claim about his body, this time that it is flesh to be eaten. In the King James Version, Jesus emphatically declares: “My flesh is meat indeed.” Even if we accept a metaphorical reading of Jesus’s words, there is no question that John the Evangelist understood Jesus in edible terms.


Offence and the Gospels

If Jesus as bread and meat is biblical in its origins, it might be surprising to see that the outrage over these claims is not unique to the current uproar around the Greggs advert.

The Gospel of John first describes people’s disbelief of what Jesus says – they doubt he is the bread he claims to be. But the real outrage comes when Jesus declares that he’s made of meat, and that people should be eating him. Even his followers, his disciples, have trouble with this: “When many of his disciples heard it, they said, ‘This teaching is difficult; who can accept it?’” Jesus, seeing that what he’s said has offended them, doubles down on his claims – and some of his (nameless) disciples decide to leave him.

Not unlike the current furore over Jesus the Sausage Roll, the Gospel of John depicts uproar and offence at Jesus being compared to food. It seems that comparing Jesus to food has a long history of causing outrage, then, but that doesn’t mean that it’s wrong – the Bible itself recognises both the comparison and the ensuing offence.

Paradoxically, then, Greggs has actually provided a scripture-inspired vision of the nativity that Christians often complain is increasingly absent in the run-up to Christmas.

While there is no real war on Christmas, those anxious about what they perceive as a lack of Jesus in the advent season should take another look at the Greggs ad, which places a biblical understanding of Jesus right in the centre.🔷

Britain’s only choice with Brexit is to hope the EU begins to break up.

Coronavirus: Big tobacco sees an opportunity in the pandemic.

Governments can learn from consumer psychology when it comes to public health messaging.