Do Brexiters really want Remainers to ‘get over it’?

The dwindling band of Brexit zealots are demanding that Remain voters stop ‘talking the UK down’ and get behind them. But do they mean it?


It hasn’t all been doom and gloom since June 23rd 2016. For one thing, I’ve made some amazing new friends. But just as importantly, I’ve grown as a person. Thanks to hundreds of calm, rational and unfailingly polite debates with Brexit voters, I’ve learned more about the EU, economics, history, logic, and the valid concerns of my fellow countrymen than ever would have been the case had the UK chosen to remain.

What a hilarious joker I am. The truth, of course, is that I’ve had a handful of vaguely informative discussions with Brexiters, but that most have gone one of two ways:

At a rough guess, over the last 21 months, I’d say the sentiments below, or some variation thereon, have made up 75%-80% of every reply I’ve had from a Brexit voter or supporter of the far right. 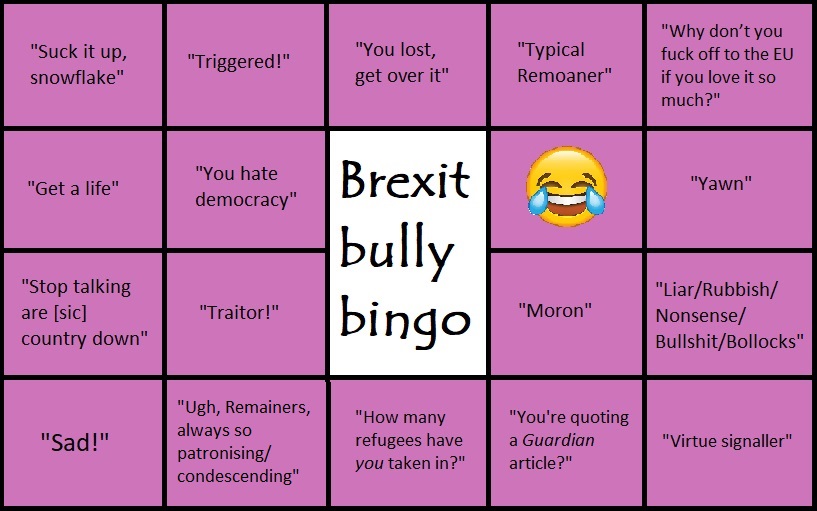 “Philistinism implies not only a collection of stock ideas, but also the use of set phrases, cliches, banalities expressed in faded words.
A true philistine has nothing but these trivial ideas, of which he entirely consists” – Vladimir Nabokov

At first, I thought this was a silencing tactic – a bid to encourage Remainers to accept defeat and start to help planning for the UK’s future. After all, these jibes were, in the early phases, interspersed with cries of “Get behind Brexit!” and “Stop talking Britain down!”.

But then I thought for a second. Crowing and sneering aren’t traditionally the most effective methods of building consensus. Who among us, when taunted by the school bully, didn’t immediately go home and plot grisly revenge?

Speaking for myself, these tired, unimaginative and incoherent slurs (the fact that they can’t be bothered to think of any new ones a year and a half on is insulting in itself), in both tone and content, have had the opposite effect. to the one ostensibly intended.

When I voted in the referendum, I was maybe 80/20 in favour of the EU (in part because some of the tabloid lies, like the “bloated bureaucracy” and “accounts not signed off” had penetrated even my critical faculties). But my pro-Remain position has hardened with every passing day – partly because every bit of research I’ve done has either vaporised an old EU myth or turned up yet another advantage of membership; but in no small part because of the jeering and gloating of the winners. As of January 9 2018, you’d struggle to detect any doubt within me about the rightness of remaining in the Large Hadron Collider.

If they really wanted to get us on side, surely the Brexiters would be using more conciliatory language? Something like, “Hey, look, Leave won. Sorry, let’s make the best of it”, or “Great match. Tough luck. Now, any suggestions as to what we do next?” But no; the majority persist with their playground taunts, using language specifically designed to alienate, to inflame, to divide, to enrage.

Before I go on, an aside: I usually divide the various Brexit trolls I’ve encountered into three tribes. They’re not always easy to tell apart, and there’s overlap, but they are distinct breeds. (NB these are not intended to encompass all Brexit voters – just the annoying, inarticulate, abusive ones.)

The good old-fashioned troll, the internet original, what we might in the olden days have referred to as an imp, a contrarian, or a Devil’s advocate. A sad individual, deeply bitter about something – usually a glaring disparity between demand and supply of sex – and among the most likely to suit up and shoot up a school. Depending on his level of commitment, he can actually be halfway inventive in his use of language, and have done at least some superficial research on the subject at hand.

The paid troll; the Skopje/St Petersburg teenager with an iffy grasp of English idioms who sometimes forgets to turn off his location. Spreading disinformation, stoking dissent and generally increasing unhappiness in the west is his day job, but since it only pays about 250 roubles an hour, he’s not that committed.

Finally, we have the hardcore Brexiteer, whose ferocious antipathy towards all things forrin and anything resembling a fact render him firmly committed, no matter what, to eating only produce grown in the British Isles, picked by British hands, and delivered by British McDonald’s employees (only white ones, natch).

For the Gammonite (from the nickname for the pink and sweaty old racists who make up the average audience on the BBC’s Question Time – the Wall of Gammon), nothing less than an adamantium Brexit will do. After all, Britain is so fucking amazing (in spite of containing 48% Remainers, enemy-of-the-people judges, luvvies, students, women, gays, trans people, Labour voters, Green voters, Liberal Democrat voters, liberals, scroungers, immigrants, the BBC, the Guardian, vegetarians and disabled people), it doesn’t need to trade even on WTO terms. WE’LL TRADE ON OUR TERMS, OR YOU WILL SUCCUMB TO THE CANNONS OF HMS VICTORY, FORRINER!

I know – at least, I hope – that there are some Brexit voters out there who genuinely want us all to put our differences behind us and start working together on a new vision for the UK. (If you’re reading: hard pass here. Sort your own mess out.) But you really don’t hear a lot out of this group, if they exist. The most vocal, surviving exponents of Brexit only seem interested in mocking, shocking, and blocking.

And I’ve just figured out why. It doesn’t matter which of the three tribes you’re dealing with: none of them actually wants us to “get over it”. For their various reasons, they all want us to carry on moaning till the day we – or more likely, they – die.

With the first two groups, the reason is obvious. Kevin’s sole raison d’etre is to cause and enjoy pain in others. If Brexit is cancelled, he’ll probably just switch sides and start taunting the defeated Brexiters.

The drones have no more interest in ending hostilities. Their function is to sow division, to widen the cracks in western society. Of course they want the conflict to continue. If all of the UK suddenly came together, held hands and vowed to make a success of Brexit, it would be their worst nightmare (well, their second worst, after Brexit being cancelled).

But what about the Gammonites, the dwindling band of Brexit zealots who would rather eat a hundredweight of shit than learn a word of French? What do they have to gain from prolonging the fighting?

These are, it would seem, people with precious little experience of success. They tend to be older, balder, and unhappier than most; they didn’t go to university, they married someone they didn’t like, if they married at all, and they haven’t travelled extensively or otherwise ticked many boxes on their bucket list. So, in the first place, they want to wring every last possible drop of joy from this rare thing in their lives: a victory. 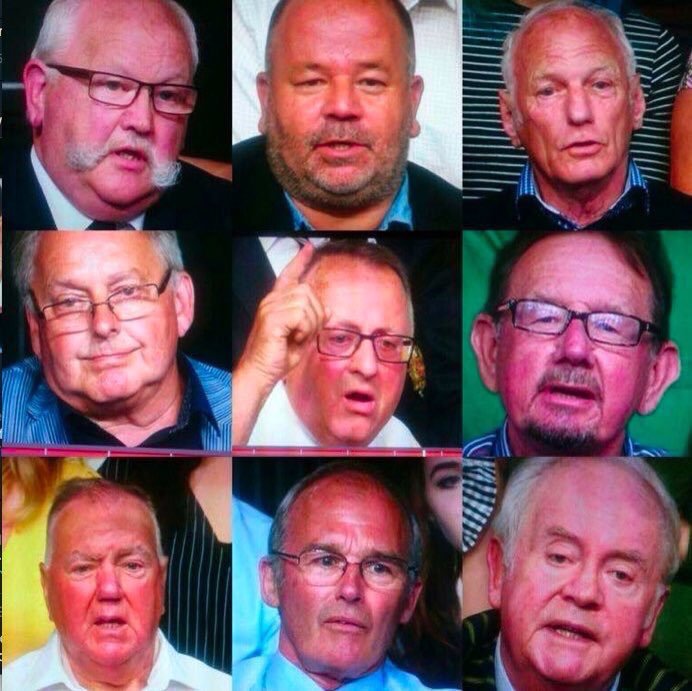 Moreover, Brexit for them is a victory without a trophy. It has brought them nothing concrete, so far, barring more expensive holidays and 20% on their monthly food bills. And you can’t exactly flaunt that to the grandkids. Yeah, so in a few months’ time they’ll have some shiny blue passports, and maybe even some STAMPS, to help them jubilate. But in the meantime?

Sad tweets by liberals and students! OK, they’re not tangible, as such – Schadenfreude is no Jules Rimet trophy – but you can, in a pinch, print them out and wank heartlessly over them.

(The most remarkable moment of Trump’s presidency win in the US for me was not the win itself, but the moment, the day after, when the winners chose how to celebrate. No one seemed concerned with the sunlit uplands that would magically materialise under Donnie’s rule; the only thing that seemed to matter to them was … mugs of liberal tears. It wasn’t their victory that was important; it was their perceived enemy’s defeat.)

(Don’t click on that link. It’s Infowars. Just there for reasons of journalistic integrity.) 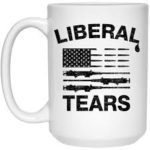 Finally, I think, despite their bullish idealism, most Brexiters know, deep down, that their victory is as empty as a Ukip youth rally. The referendum was their very first taste of success; but if Brexit is pursued to its logical conclusion, it’s likely to be the last success that any of us, barring a handful of non-dom billionaire disaster capitalists, tastes for at least a generation.

The reason they’re still doing a victory lap 19 months after winning a trophy made of shit in a rigged three-legged race is simple: they know, as soon as they stop, two of those legs will be chopped off.

Well, trolls, I have good news for you. We Remainers have no intention of moving on, or getting it over it. We won’t stop “crying” or “moaning” (or pointing out the flaws in your non-plan) until Brexit is reversed, and we have our tolerant, open, compassionate, brave country back. Happy new year.🔷


(This piece was first published in Rainbows & Lollipops)