The founding fathers intended for the Senators to cast an impeachment vote based on principles of impartially, democracy, and law.

Depending on one’s point of view or one’s political affiliation, the Republican-controlled Senate’s impeachment decision not to remove President Trump from office is OK or not OK. But regardless of one’s point of view or political affiliation, EVERYONE should agree that the Republican-controlled Senate’s Trump impeachment process to reach that decision is toxic to American democracy.

Senate Majority Leader Mitch McConnell developed his own rules that changed President Trump’s impeachment from a trial to a hearing that hid the facts from the American people. / Wikimedia - Gage Skidmore

This was confirmed in 1993 by the Supreme Court when they ruled unanimously in Nixon v. United States.

Even though the American public wanted witnesses to testify to the facts Senate Republicans decided to ignore them and cover up the facts. / CNN

Former Chief Justice William Rehnquist, who wrote the unanimous decision for the Court, stated Article I, Section 3 of the U.S. Constitution gives the Senate the “sole power to try all impeachments.” Meaning the Constitution’s use of the word sole prohibits any intervention by the U.S. judiciary in any aspect of a Senate impeachment trial. This empowers Senators to decide to acquit or remove a President from office for whatever reason they choose, without having to take into consideration any criminal or civil laws.

The U.S. Constitution gives Senators the right to remove or not remove a President from office for reason they choose, but the Constitution does require them to swear an oath to conduct a true impartial trial.

The Trump impeachment process is harmful and toxic for the following 3 reasons:

In other words, Senators swear to be impartial in preforming their impeachment duties. Republicans lead by Majority Leader Mitch McConnell violated the constitutional oath long before the trial started.

A month before the trial began Fox News asked McConnell about the Trump impeachment process, he replied, “Everything I do during this I’m coordinating with the White House counsel. There will be no difference between the president’s position and our position as to how to handle this.”

When asked if witnesses would be allowed to participate in the trial McConnell said, “The president’s counsel may or may not decide they want to have witnesses. The case is so darn weak coming over from the House.”

Not only was McConnell declaring to wrongfully collude with the lawyer of the accused person he swore to impartially judge, but he also had reached an opinion on the case before the trial began.

McConnell was not alone in pre-judging the trial, Sen. Lindsey Graham told CNN before the full House had voted on the articles of impeachment, “I am trying to give a pretty clear signal I have made up my mind. I’m not trying to pretend to be a fair juror here.”

Neither McConnell, Graham, nor the other pre-judging Republican Senators expressed any shame in violating their constitutional oath to be impartial jurors.

No Witnesses Or Evidentiary Documents Allowed

As promised McConnell denied House prosecutors the opportunity to call any witnesses who could give firsthand knowledge of President Trump’s misconduct, or to introduce evidentiary documents that proved his misconduct. 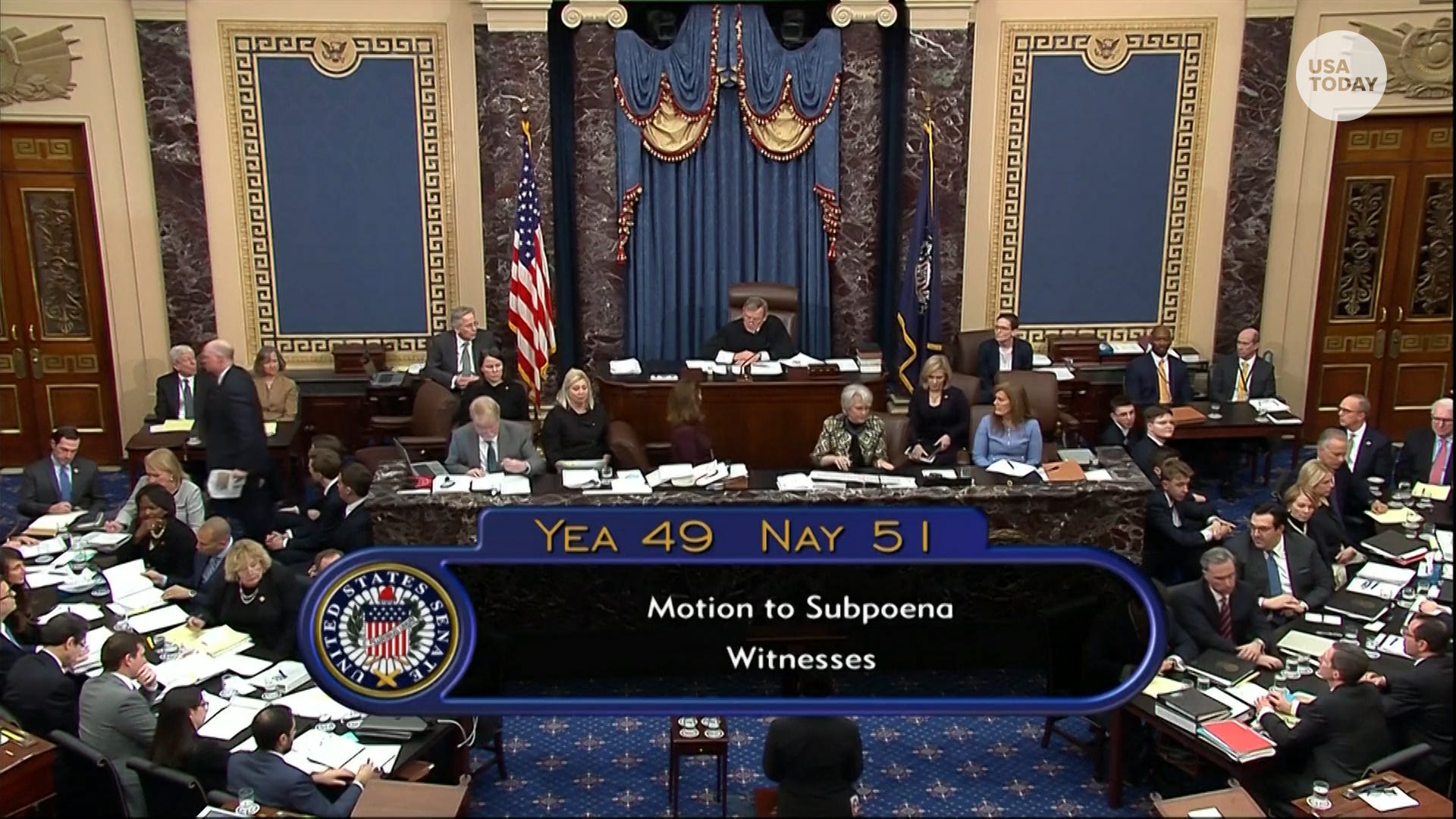 All but 2 Republican Senators voted against calling witnesses to testify to the facts.

51 Republican Senators voted against allowing witnesses or evidence. This sets a toxic precedent for future impeachments, allowing the trial to be changed to a hearing where Senators and American citizens are denied access to all the facts and events that have occurred.

As Democratic Senate Minority Leader Sen. Chuck Schumer said, “if my Republican colleagues refuse to even consider witnesses and documents in this trial, this country is headed towards the greatest cover up since Watergate.”

Regardless of whether Senators decide to vote guilty or not guilty after being presented with all the documents and hearing all witnesses, a true trial allows access to all the facts.

The Accused Is Allowed To Set The Terms Of Their Judgment

The second promise McConnell kept was to set the rules of the Trump impeachment process in “total coordination” with the accused person on trial, President Trump. McConnell spoke directly to President Trump before implementing any procedures of the Trump impeachment process. This establishes the precedent that if a President’s political party controls the Senate he or she can collude with the Senate to set the terms of their own trial. It effectually means that an impeachment trial is non-existent and holding a President accountable for wrong doing is impossible.

Based on the way Republican Senators conducted the impeachment of President Trump future Presidents could become Kings unaccountable to anyone.

These 3 breaches by Senate Republicans of the Trump impeachment process, are more toxic to American democracy than any harm Democrats claim a Republican acquittal vote of President Trump could ever be. Because the founding fathers and the Constitution intend for a removal or acquittal vote to be a political decision decided on whatever reason a Senator chooses.

But based on the impeachment oath Senators are required to take, the founding fathers and the Constitution intended for the impeachment process Senators go through to cast a vote to be based on principles of impartially, democracy, and law!!!🔷

[This piece was originally published on Isaac Newton Farris Jr.’s blog and re-published in PMP Magazine on 3 February 2020, with the author’s consent. | The author writes in a personal capacity.]

British people now define themselves as ‘Leavers’ or ‘Remainers’ – so what happens after Brexit?

The wrong perspective on a Joe Biden Black Vice President.

Where are the African American leaders?