The one thing a coronavirus shutdown CANNOT be allowed to shut down.

President Trump, the House, and the Senate must do everything in their power to make sure that next November all eligible Americans can cast their vote in the 2020 general election.

Most Governors, Mayors, and county officials are facing the fact, with no leadership and inconsistent support from President Trump, that a coronavirus shutdown of normal daily functions of society must be implemented to combat the Covid-19 coronavirus. This means that schools, churches, stores, restaurants, bars, and most places of business must shutdown. But there is one thing that not even wars in America’s past could shut down, it’s the one thing that a coronavirus shutdown CANNOT be allowed to shut down!!!

According to the Johns Hopkins University data dashboard America has over 400,000 cases of confirmed Covid-19 coronavirus and over 12,000 deaths from it. 2 weeks ago confirmed cases were just 4,600 and only 85 people had died from it, the rapid spread of the virus has created a widespread halt to normal human interactions. The NBA suspended its season, the NCAA canceled the 2020 men and woman championships, Major League Baseball delayed last week’s season start until at least mid-May, the NHL announced a pause to its season, the MLS suspended its season, the PGA announced the cancellation of the Masters, the Kentucky Derby is postponed to September and the International Olympic Committee and Japan have announced the postponement of the 2020 Summer Olympic Games.

School closures due to the coronavirus shutdown have impacted at least 124,000 U.S. public and private schools and affected at least 55 million students. It impacts the spiritual well-being of millions of souls by making attendance of weekly religious services impossible and impacts the financial well-being of churches, synagogues, and mosques by shutting down the weekly services that generate their income of tithes and donations.

Coronavirus shutdown suspensions, postponements, and cancellations to the social routine of America are both emotionally and economically disruptive but with proper planning, they pose no long term threat to American democracy. Unfortunately, the coronavirus shutdown has also caused postponements to the political routine of America that without proper planning pose a definite fatal threat to American democracy. 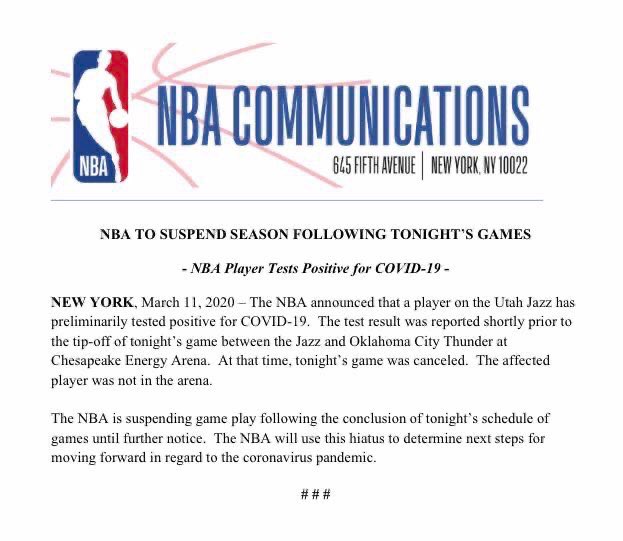 Ten states: Georgia, Connecticut, Delaware, Indiana, Maryland, Ohio, Pennsylvania, Rhode Island, Louisiana, Kentucky, and the Puerto Rico territory have postponed their 2020 presidential primaries in response to the coronavirus outbreak. Wyoming has canceled the in-person voting portion of its Democratic caucus, which is scheduled for April 4, they are encouraging voters to either mail-in votes or pick up and drop off individual ballots at special locations. Alaska, whose primary is scheduled for the same date, also canceled the in-person voting portion and replaced it with an extensive vote-by-mail process.

A voter should not be denied the opportunity to cast a vote because a physical polling location could not open, all voters should have the option of either dropping off their ballot at a pre-approved location or mailing it in. Because elections are the one thing no democracy can live without.

Fortunately for Democrats, enough state Democratic primary elections had occurred before the 10 states had to postpone theirs, making it clear and leaving no doubt that Joe Biden had the necessary support nationally to win the Democratic nomination. Wyoming and Alaska could decide to cancel in-person voting because they have a viable ballot mail-in option for voters, the 10 states and Puerto Rico had to postpone their entire primary election because they do not have a viable ballot mail-in option for their voters. Since the purpose of postponing the primaries is to avoid the in-person interaction of voters, the 10 states and Puerto Rico are hoping that the coronavirus shutdown will be lifted by the new election date they have selected, if it is not the election still can’t be held.

“An election is the one thing the coronavirus shutdown cannot be allowed to shut down!!!”

Shutting down schools, churches, stores, restaurants, bars, and most places of business makes American democracy inconvenient, boring and miserable but still very much possible. Shutting down elections makes American democracy very much impossible, a democratic society can’t exist if its citizens can’t exercise the right to vote. Since it’s impossible to know when the coronavirus shutdown can be safely lifted, in theory, it could still be in effect 8 months from now when the November general election is scheduled to be held. For voters who live in 1 of the 22 states that require a reason to vote by mail and are not set up to process large volumes of mail-in ballots, means those voters could potentially be denied the opportunity to make their voice heard in whether Joe Biden or Donald Trump should be elected the next president. 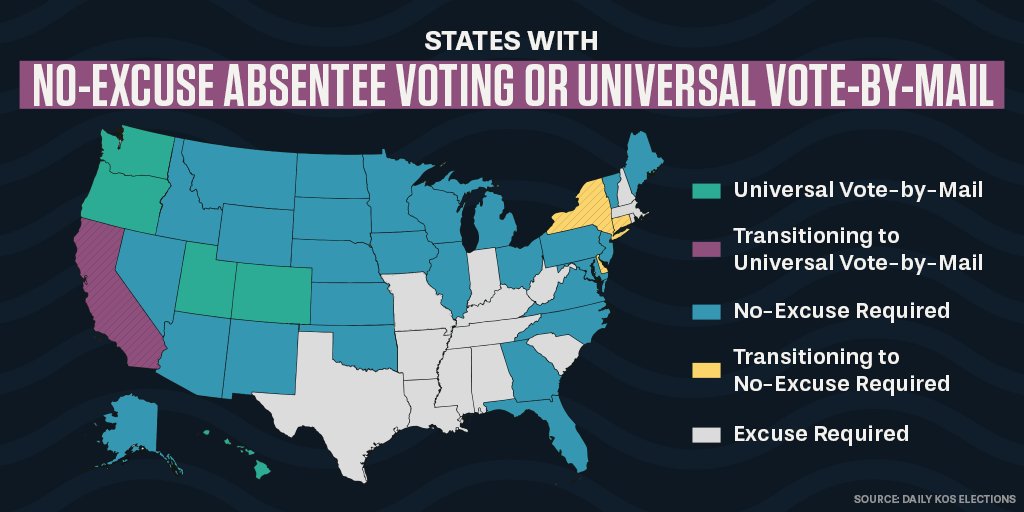 Not surprisingly Democrats, who have the most to gain from an election that allows as many voters to vote as possible, are making attempts to ensure that all eligible Americans have the opportunity to vote regardless of the coronavirus shutdown.

Democrat Senators Amy Klobuchar and Ron Wyden have introduced The Natural Disaster and Emergency Ballot Act. As Sen. Wyden said: “Ohio, Louisiana, Georgia, and other states are showing that without vote-by-mail, states might not be able to hold elections at all. I understand that standing up a new election system will be a heavy lift, but in the face of this pandemic, vote by mail is the best choice we have to keep our democracy running.”

If passed into law the Act would:

◊ Require states and jurisdictions to establish a publicly available contingency plan to enable eligible Americans to vote in the case of an emergency;

◊ Direct all states to use envelopes with an Intelligent Mail bar code to allow voters to track their ballot for the 2020 election and for following elections, create a federal domestic ballot tracking program with the necessary funds to implement such a program;

◊ Require absentee ballots to be counted if postmarked or signed before the close of the polls on Election Day and received on or before the day on which final vote totals are required by law to be submitted to the State for an official canvass of the election;

◊ Authorize funds necessary sums to reimburse states for the cost of implementing the Act, such as providing prepaid postage and purchasing additional ballot scanners.

The only addition needed to the Act is a recommendation from the Brennan Center for Justice’s 10-page report, How to Protect the 2020 Vote from the Coronavirus. It recommends that all states allow citizens to register to vote online.

The coronavirus shutdown has caused the type of disruption and devastation to American society seen during the Civil War, the Great Depression, and World War 2. And despite all the killing, the economic devastation, the high rate of unemployment, and the break-down of social society routines that these 3 crises inflicted on America there was one constant, FEDERAL ELECTIONS!!! Elections and democracy are synonymous you can’t have one without the other because elections are the only way to guarantee government of the people, by the people, for the people. President Trump, the House, and the Senate must do everything in their power to make sure that next November come hell, high water, or the coronavirus all eligible Americans can cast their vote in the 2020 general election!🔷

[This piece was originally published in Isaac Newton Farris Jr.’s blog and re-published in PMP Magazine on 7 April 2020, with the author’s consent. | The author writes in a personal capacity.]


>>> Please think about the environment before printing this article.

Learning from a whale — Don’t ignore the advice that experts give you.

The wrong perspective on a Joe Biden Black Vice President.

Where are the African American leaders?