Refugees have become “props” for organisations to make a wider point.

Some people rightly argue for their right to privacy from the press and their right to choose to release information about themselves if, and when, they wish to do so. Refugees don’t get to choose.

A significant issue with the discourse surrounding asylum seekers and refugees is that individuals concerned are often only seen as essentially props for a wider context. Now, there are arguably reasons for this, yet each time it is done we see a reduction in their own agency.

Remember the picture of three-year-old Alan Kurdi? (No, I won’t be showing it again here)

Remember the short term uptick in sympathy for asylum seekers? Now, think about the framing of that image. Think about how it felt for the family to keep seeing it plastered across the papers.

Would you wish to see that if they were a member of your own family? But, it did increase sympathies for asylum seekers, albeit briefly. It also helped increase donations to organisations who could then use them to help more people. That’s the argument used time and again.

What do you first see when you look at this picture? 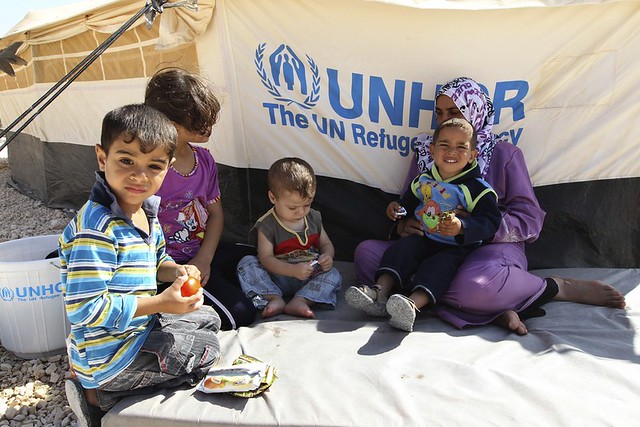 Is it a smiling child on someone’s lap? A confused looking child looking at the camera? Or is it the logo in the background? Does that logo add to the story in the picture in any way?

What about this image used in the Daily Mail?

What does it tell you about the individuals who are in it? The context in the article is that they are celebrating getting put in “five star hotels”. The reality more likely is relief that they have survived the crossing.

Were any of those pictured paid for their time or the use of their likeness? Were they asked? Probably with the UNHCR one for the latter question, unlikely for the former, and pretty much certainly not for both in the second image.

There has been a big issue the last couple of weeks surrounding whether an individual has the right to privacy from the press and could they then choose to release information about themselves which they choose. Refugees don’t get that choice.

When you look at images of them, are you seeing their stories? Or are you seeing the stories which people want to tell about them, both positive and negative? All too often it is the latter. The refugees themselves are essentially “props” for organisations to make a wider point.

If it were you or I, and our images were being used, we would be rightly outraged. For refugees though it is taken for granted that they will have their likeness shared around the world without a second thought for their choices. Their lives. Their agency.

By both they are viewed as props.

[This piece was first published as a Twitter thread and turned into the above article on 9 March 2021 with the purpose of reaching a larger audience. It has been minorly edited and corrected, and published with the author’s consent. | The author of the tweets writes in a personal capacity.]